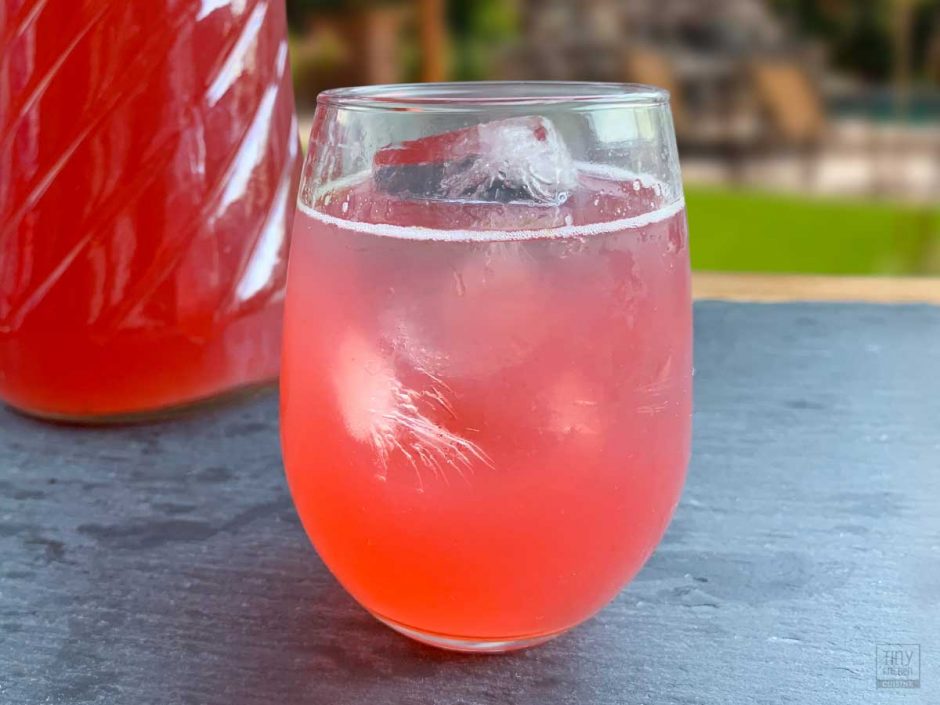 This sweet and tangy drink will absolutely thrill your taste buds. Made simply with rhubarb, water, and honey, the flavor of this Rhubarb Ade is very similar to a sour cherry pie. Serve it straight, over ice, mixed with some iced tea, or even add it to an adult beverage. The bitterness of the rhubarb mixed with the sweetness of the honey blends so perfectly to create this refreshment that it’s really hard to stop drinking.

I’ve been working with the Philomath Community Gleaners here in Oregon and they recently got in both a gorgeous bounty of rhubarb as well as a large donation of local honey. While most people immediately gravitate toward classic rhubarb recipes like Strawberry Rhubarb Pie, I wanted to come up with a few ideas that people wouldn’t normally think of. Transforming these two ingredients into a delicious Rhubarb Ade was definitely at the top of my list. The result is just delightful!

Rhubarb is a vegetable that looks a lot celery, except the stalks are twice as thick and they are a vibrant red color. When you get rhubarb, you want to remove and discard the leaves. Rhubarb leaves have high levels oxalic acid and are considered poisonous. Small doses will make you nauseated but a large dose can be lethal. So always remove rhubarb leaves!

Rhubarb can be eaten raw, but it’s very bitter. Most rhubarb recipes pair it a sweetener of some sort to compensate for its sourness. It pairs very well with berries of all sort and is most commonly seen partnered with strawberries. Because of this, you’ll sometimes hear people classify rhubarb it in with “fruit” but it’s technically a vegetable.

This drink is very easy to prepare in a tiny kitchen. You’re going to need a large pot, a stove top, knife, cutting board, a strainer, and a pitcher big enough to hold 1 quarter of liquid. You’ll spend less than 10 minutes cutting the rhubarb stalks down into 1/2-inch cubes, but the rest of the process is just waiting—for it to cook as well as cool. Once you’re done, you can either keep it in your fridge for about a week or you can even turn them into delicious freezer pops!

Rhubarb juices are known to stain, but not nearly as bad as other red vegetables. If you’re using a wooden cutting board like I do, just sprinkle some baking soda on the surface of the board, then work it into the stain with a lemon. Rinse the board and dry it with a towel. The staining should come right up.

Can I Substitute Sugar for Honey?

Yes! I used honey because I think it has a wonderful flavor and it sweetens drinks perfectly. But, if you want to use sugar instead, just substitute the 1/3 cup of honey with 1/2 cup of sugar. You will be mixing the sugar into liquid that is already hot, but you might not melt down all of the granules in one shot. Just stir your Rhubarb Ade again before serving to keep the sugar from settling on the bottom.

Give this recipe for Honey-Sweetened Rhubarb Ade a shot and let me know what you think. Don’t forget to come back and give me your rating. If you have any questions or find other substitutions that are yummy, feel free add those in your comments! As always, if you like this recipe, please share it on social media so other people know about it too. Let’s eat!

Fall Recipes to Keep You Cozy